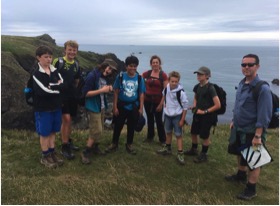 And that’s not all. Visits were made to the dry ski slope at Sandown and to Top Golf at Addlestone. A busy evening was spent at Polyapes Campsite clearing scrub, brambles, nettles and moving the woodpile back to where it should have been to improve the site and work toward the outdoor challenge. We enjoyed an exhilarating June evening cable boarding at JB Waterski. In December, we re-enacted the WW2 Operation Claymore (‘shipping’ on Black Pond was located and destroyed!) and visited the outdoor ice rink at Hampton Court Palace. Much use has been made of the shooting and climbing wall facilities in the Chris Platt Centre, including for the District Postal Shooting Competition.

In addition, we held training and badge nights – map and compass, knots and lashings, first aid (everyone resuscitated Annie!). As a result many scouts attained the various challenge badges and emergency aid, swimming, fire safety and other activity badges.

The year saw a large increase in participation in the Duke of Edinburgh’s Award Scheme. Whilst primarily aimed at the Explorer Scout age range older Scouts have needed very little encouragement to sign up as soon as they are eligible and are enjoying ‘DofE’ activities from volunteering to expeditions.

The troop offers opportunities to try new activities that members might not even think of doing until someone says ‘you’ve not tried it, why not give it a go?’ The fishing competition is a good example; orienteering is another.

Hinchley Wood Scouts took part in the Esher Scouts Orienteering Club (ESOC) team in the Southern Navigators Junior League Orienteering on Saturday mornings last winter. Largely thanks to Angus Lund’s leadership Esher Scouts won the Junior League and Idris Wills and William Emmerson were 1st & 2nd placed in the year 6&7 individual results. Orienteering is a very inclusive sport, everyone is welcome at whatever level they take part and it is an excellent way of gaining navigational skills.

We have had a busy year not only with our troop nights but with District and County activities too.

Here are the results of the District & County activities in 2016-17:

Golden woggles were gained by Nisan Kotik, Matthew Nair and Callum Smith. These are awarded to leaders of competition winning teams.

Very well done to the many Scouts who supported District events.

This year (as the Cubs were off to Brownsea Island) the Troop held its own Spring Camp at Broadstone Warren in Sussex. Twenty-six scouts in four patrols spent Saturday enjoying sessions of archery, low ropes and an off-site mountain biking excursion. After all that the younger scouts practised their camp skills by cooking their evening meal whilst the older scouts carried out a survival exercise. Several younger scouts made & slept in bivvys too! Next day it was Operation Locate Gold – an all-day off-site exercise involving navigation, hiking and some water based treasure hunting in canoes & kayaks.

Later we had wide games. In between all this camp skills were practised to gain the outdoor challenge badge. On Monday everything got packed away in time for Cube course climbing sessions.

The troop, with the rest of the Group, headed up to Walton Firs in June to join the all-District Camp. With all the massive attractions ranging from circus skills to giant table football to a huge firework display we had a super time in great company.

After last year’s trip to Snowdonia, it was off to Scotland for Summer Camp. The site at Achnacloich near Oban is set on the shore of Loch Etive with superb views of the hills around about. The site, as usual for a Summer Camp, was totally ‘green field’ (ie no facilities!).

The campers, 23 scouts in 4 patrols and 9 explorer scouts had a great time. Highlights of the camp were climbing Ben Nevis, building bivouacs and spending nights in them, kayaking & canoeing on Loch Etive and coasteering at Ganavan.

Everyone went ‘overseas’; the explorers and older scouts went on overnight DofE expeditions on the island of Mull, whilst the younger scouts got very wet on their day hillwalk on Mull. We went sea fishing out on the Firth of Lorne on a glorious sunny afternoon and came back with plenty of mackerel which we cooked for our ‘last supper’.

On the last full day of camp we all climbed Ben Nevis, having a snowball fight but sadly no view from the summit. Dinner that night was the traditional fish & chips, in a car park in Fort William. We broke the homeward journey with a stay at Greenhead Youth Hostel and a visit to Hadrian’s Wall. 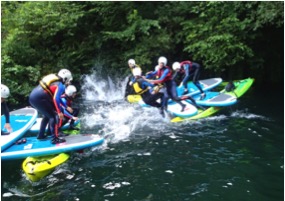 Paddlesport activities are an ever-popular part of scouting at Hinchley Wood and our fleet of kayaks and open canoes were well used. Besides river sessions on summer evenings, we had swimming pool sessions at Guildford Lido which were ideal for practising in comfort those ‘wet strokes’ that are meant to help keep you dry, but so often result in capsizing.

Rounding off the river and pool sessions, we ran our paddling weekend on the River Wye at Symonds Yat. Several scouts gained their One Star awards and others are working on Two and Three Star.

This year troop numbers have remained high (with a waiting list) which means a good deal of work for our enthusiastic and dedicated Troop leadership team. We welcomed Debbie Shaw and Aisha Solanki to join the established team of Jeff Almond, Adrian Ducker, Peter Hanna, Harvey Panesar, Tom Sharman and Gill Wills.

Adrian Ducker has been very grateful for the considerable support from them and also from Chris Beaney, John Daoud, Fiona Smales and other group leaders and parents, headed up by our parent reps, without whom the level of activities could not have been maintained. An especially big thank you goes to all those who have helped over the year.

Additional regular help is always needed – four leaders at every meeting is the minimum to run an active programme for a troop of 30-plus scouts.