Explorers are young people aged 14+ to 18 years old. Throughout the year the explorer unit have taken part in a diverse range of activities.

In the spring the explorers took part in fencing, scuba diving run by the Kingston British Sub Aqua Club at New Malden swimming pool. They had a fencing lesson run by Joe Shackell of the Kingston Fencing club. Cycle-borne paramedic Samuel Crompton Brook, alumni HW explorer himself, turned up with tons of lifesaving kit and gave the explorers an insight into his job and some lessons in first aid.

In the summer the explorers were to be found getting relief from their academic studies by rock climbing in Tolworth and kayaking in Guildford, practising their skills at Guildford Lido. 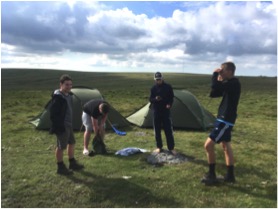 Nine explorers went up to Scotland and enjoyed everything the West Highlands have to offer. Many ‘DofE’ expeditions took part on the Isle of Mull, truly suitable remote country for getting away from it all! Another ‘first’ for the unit was a day on the ‘Via Ferrata’ – literally ‘Iron Way’ – rock faces fitted up with wire ropes, ladders etc with huge overhangs, waterfalls to negotiate and drops!

All explorers are enrolled in the Duke of Edinburgh Award Scheme and this year five have completed their Bronze and nine their Silver Awards. They are also working on the Chief Scouts Platinum and Diamond Awards. These are aligned with the Duke of Edinburgh Bronze & Silver Awards, so members have the bonus of being able to collect ‘DofE’ awards on their way to the Scouting awards. The Unit is dedicated to helping our explorer scouts to achieve these and then aim towards the coveted Queens Scout Award (and Gold ‘DofE’). We now have the record number of 11 explorer and network scouts working towards their Gold Duke of Edinburgh award.

Unit members have taken part in a full range of District activities, here are the results:

September comes and we are canoeing and kayaking on moving water on the river Wye in Wales by Symonds Yat. Later in autumn we helped run the troop’s bonfire night and took part in the District shooting competition. In December the unit invited ex-members to join them for the unit Christmas social catered for by Peter Hanna at the HQ, turned into a winter wonderland for the one night only. Unit members and older scouts run the Christmas Post not only as a service for the local area but also to raise funds for good causes. This year the proceeds were given to Kent Sussex & Surrey Air Ambulance and helped the explorers working towards the Fundraiser Badge.

Explorers complete Young Leader Module A training, a requirement for Unit members who give service by helping with other Sections. This is important for those who want to complete their DofE volunteering and in addition many have taken a number of the other 11 modules available.

The incorporation of the Duke of Edinburgh Award within the Explorer award scheme has had the spin-off of numbers of experienced explorers keen to do the volunteering section with the younger Sections. The Beaver and Cub Sections in particular have received help from young people (from inside and outside Scouting) giving service for Scout Awards and/or ‘D of E’.

Seven of the explorers took part in the Four Inns Walk, run throughout the Peak District, covering in excess of 40 miles in some very respectable times, even when slowed down by your writer. Another, younger, team won the National (and Esher) trophies for the fastest unaccompanied team completing the 35K event, a truly excellent result.

The 1st Hinchley Wood Explorer Unit is led by John Daoud with some help from other leaders. More leadership is an urgent need for the expanding Unit.