Phil Cooper
The cubs had an action packed year which started off with a memorable trip to Brownsea Island in June as part of our Cubs 100 celebrations, marking 100 years since Baden Powell introduced the Cub Section. 35 cubs, leaders and parents travelled to Poole and back by train and the cubs carried all their own kit to and from the island, which was an impressive feat. Activities on the island included low ropes, team building challenges, a visit to the Scout Stone, a campfire as well as a walk in search of the timid and beautiful red squirrels. The older cubs were lucky enough to camp for the night on the same campsite that Lord Baden Powell used for the first ever Scout camp in 1907. On the way back home we stopped off at the RNLI lifeboat HQ in Poole and to hear a talk about the work of the RNLI. 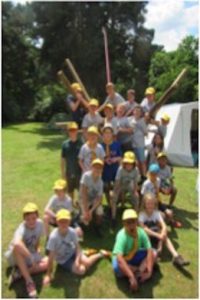 At the end of June we took part in the Esher District Group Camp at Walton Firs which included a Guinness World Record attempt! Our cubs, along with the other District Cub Packs (and ably organised by the Dittons) successfully created the largest ever human World Scout Membership badge, consisting of over 300 cubs. The Cubs 100 celebrations concluded in October with a District Centenary Celebration at Polyapes which included a day of fun activities, as well as the unveiling of a purpose built totem pole.

The cubs also particularly loved the visit by the Reptile Man in November, who brought in a selection of creatures, from lizards, to giant tortoises and even an albino Burmese python! It was an opportunity to see, and in some cases hold, reptiles that they would never normally have the chance to experience first-hand.

The highest award that can be earned as a cub is the Chief Scout’s Silver Award which was gained this year by George Sturmer, Joe Moylan-Jones, Henry Bhamra, Ethan Peebles, William Blunden, Jack Branney, Max Higgins, Rae Cruickshank and Rhys Jones. Congratulations to all.

The cub leadership team said ‘goodbye and thank you’ to Emma Kingsley and Leala Padmanabhan and welcomed David Cruickshank and Deepa Solanki to join the team of Debs Beaney, Chris Beaney, Phil Cooper, Alex Higgins, Paul Rayner and Theresa Platt. We wish to thank everyone who has helped us, in any way, to provide such a varied programme. We hope you have found it a fun and very rewarding experience. With your continued support we can keep offering a challenging, fun programme of the highest standard.

The cub leadership team would particularly like to thank parent reps Nicole Murray, Dionne Baker and Anna McKenna for all their amazing help and support, and also Rachel Branney who stepped down as parent rep and who did such a wonderful job for the cubs over several years.